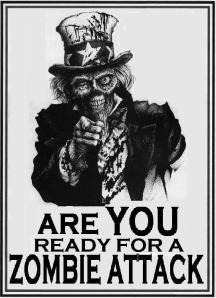 They are the stars of numerous films, books, comics, and even cartoons. Zombies. We all like to jest about an impending zombie apocalypse, or zombocalypse if you will, but how many of us are really prepared for something like that? It’s easy to act hard and say “Dude, i’d fuck a zombie up! Bring it on!!” But let’s be real now: If you were looking into the cold, dead eyes of a walking corpse I doubt you would be quite so Rambo-esque about the situation. So I present to you my personal take on what you should or should not do in case of a zombie outbreak as well as some opinions on how it may go down. Let’s begin, shall we?

-Denial Is Not Just A River In Egypt
If and when the zombocalypse hits, denial and panic will be the two most visible and common reactions. Some people are just not mentally prepared to handle the undead. Their brains will in turn react and try to protect them by pumping gallons of denial juice into said brain. Even when the zombies are knocking down their down and feasting on poor uncle Ned, most people will shake their heads in disbelief and say things like “Those arent zombies, they have the flu” or “They are just escaped mental patients or something!” But I say nay nay my friend, the flu does not make the dead walk and eat brains, we call that a “zombie”. Say it with me now-Z-aw-mby.  Next we have panic. I don’t know about you guys but I would be a tad scared if this shit actually happened. Imagine the masses all running or driving around in a blind panic. This will only make things worse for everyone which brings me to zombie survival tip #1: Remain Calm. You cannot think straight or act in a productive way if you are flipping your shit and running around like a chicken with their head cut off. You have to asses the situation, realize that there are in fact zombies eating your neighbors and get your shit together because the time has come for you to fight for your very life.

-This Is My Boomstick
Naturally if you will be fighting for your life, you will need to defend yourself with some weaponry. You may be asking “But Vuko, what is the best thing to kill a zombie with?” This is very simple: Anything that will destroy the brain. Regardless of how the zombie outbreak begins, or what it is that causes it the brain is what controls the entire body by sending electrical signals throughout the body so if we destroy the brain, the zombie body can no longer move and will in fact be dead. Undeadly dead? What do you call  something that is dead, that you kill? I should look that up on Wikipedia. But I digress. Now, depending on how the “disease” is spread you will need to adjust your weapons accordingly. If the outbreak is spread via blood then whacking away with a machete might be a bad idea because do you really want to get that close to a zombie and risk having the blood get into your mouth or an open wound? The answer is no, no you don’t. For this I recommend mid to long-range weapons i.e guns and other projectiles (crossbow etc). This will ensure that you avoid the blood splatter and not only that but it’s 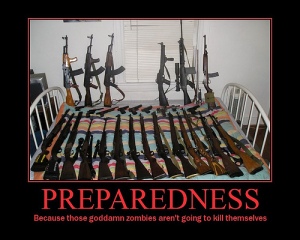 way more fun to pop a zombie with a sub machine gun than it is to whack it with an ax. Automatic weapons are my #1 suggestions, and the more ammo it holds the better off you will be. Let me paint you a picture: You are stuck in an alley with 20 zombies closing in on you. You can’t exactly shout “time out” while you fumble to reload your weak little pistol. Zombies do not work on 3rd grade “time out” rules. However, you will need some form of melee weapon should you find yourself out of ammo at some point. For this I recommend a steel baseball bat or if you can find one, a sword. Not that stupid shit you buy at the swapmeet and hang on your wall in the living room, I am talking sharp as fuck, hardcore, Rurouni Kenshin status blades. This will allow you to simply remove the head of the zombie. Another important weapon to have would be explosives. Grenades, pipe bombs, dynamite, anything that goes “boom”. If a pipe bomb was strong enough to take down the ‘graboids’ in Tremors than its good enough for the zombies too. Not only that but explosives can be thrown into a group and take out numerous zombies at a time whereas with a gun, you can only kill one or two at a time.

-Should I Stay Or Should I Go Now
One big question is “Should I stay in one place and fortify my location or should I keep moving?” This will be a personal decision that you must make on your own but I for one vote to stay mobile. If you keep moving you do not have to worry about running out of stocked up supplies or waiting on help to arrive. I would keep moving for the sake of finding any kind of help that is possible. The government will collapse once the zombocalypse hits but there will be some form of army and police somewhere in America to provide not only shelter but armed soldiers to help you fight off the zombies. Stay at home with granny and fend for yourself or go join the soldiers with AK-47s and Assault Rifles…the choice is yours. If you wish to keep moving you have two choices: Car or hoof it. Should you go with a car I recommend the H-3 hummers simply because the windows are smaller than most vehicles and most have 4 wheel capabilities which will really come in handy when you are driving over a bunch of bodies. Your Ford Taurus won’t provide much protection, nor will it be able to monster truck it over a pile of zombies. Another option is to locate your local jail or police department and steal *ahem* “borrow” a reinforced vehicle. Always pick something with barred windows to avoid zombies busting in through the glass. For those of you who would rather stay where you are and barricade your home there are some things you will need to get first. I suggest you take a trip to your local Lowes or Home Depot and get yourself a few key items. First you will need fencing/wood/metal sheets, basically anything you can use to board up your windows and reinforce your doors. You will also be able to find some short-range weaponry there such as chainsaws. Next you need to hit up the garden department and pick up what you need to make yourself a hydroponics system. No, not for growing reefer, but to make an indoor garden so that you have food. For this you would need soil, seeds, a garden box, and of course you will need an artificial lighting system. Also any kind of solar-powered generators they have because who knows how long they will be  able to keep the power going once shit hits the fan.

-Super Market Sweep
If you are choosing to stay in one place I hiiiiighly recommend going to the grocery store (Super Wal*Mart is the best for this as they have not only food but other things as well like guns and blankets and such) to stock up on food and water. Running water will be a luxury that we will lose shortly after the outbreak begins so get as many gallons/bottles of water as possible. Also when it comes to food avoid perishable items and opt for the more Top Ramen type items that you know will hold up over a period of time because you have no idea how long you will be stuck in your little reinforced home. If you can, try to research the shelf life of certain food items prior to the outbreak so that you will know exactly what to grab when you are stocking up on goods.

-The Hero Factor
One of your first reactions when the outbreak hits will be to rescue your friends/family and ensure that they are safe. I for one plan on heading straight to my parents house and taking them to a house boat on Lake Mead, fill that bitch with supplies, and float them out on the water, far away from the shoreline with a small arsenal to defend themselves. Once I know they are safe I will be able to leave the state without feeling like a bag of dicks that abandoned their parents. As for your friends, I would only suggest going after them if you plan on having them join your survival team. If you choose to have a survival team I recommend keeping it to 5-6 people. Any group larger than that will not only be hard to
handle but will be easier to spot when moving around during the day. More people means more mouths to feed as well so as I said, keep it small. Also only include people who can defend themselves. If you have a bitch friend who will do nothing but scream like an idiot and freeze up, leave them at home. This is the end of life as you have come to know it and your number one priority is to stay alive and having a weak person in your group will lessen your chances of survival by at least 30%.

-The World of Tomorrow
Once the first person is infected it will take about 1-2 months for the “disease” to spread to the entire world. As far as how long the outbreak lasts, I can’t even begin to guess. Depending on how bad the outbreak is it could take anywhere from a few month to a few years for the human species to regain control but if you are prepared both mentally and physically for it I think we all have a pretty good chance. We as humans are very strong-willed and will do anything to ensure our survival. In my opinion the outbreak will infect at least 75-80% of the population but the 20 or so % of us that last the initial infection will be left to rebuild society which will be awesome and let me tell you why: Survival of the fittest baby. Only the strongest and most intelligent people will be left to rebuild the world and start fresh. This could be a chance for us to really fix the world and make it all sunshine and roses like it should be now. A new dawn, a whole new world…filled with zombie corpses.

“﻿﻿﻿﻿﻿﻿Only those ﻿as super smart as me will be left alive to bitterly cry-DAM YOUS! Goddamn yous all to Hell!!” 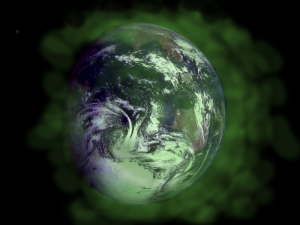